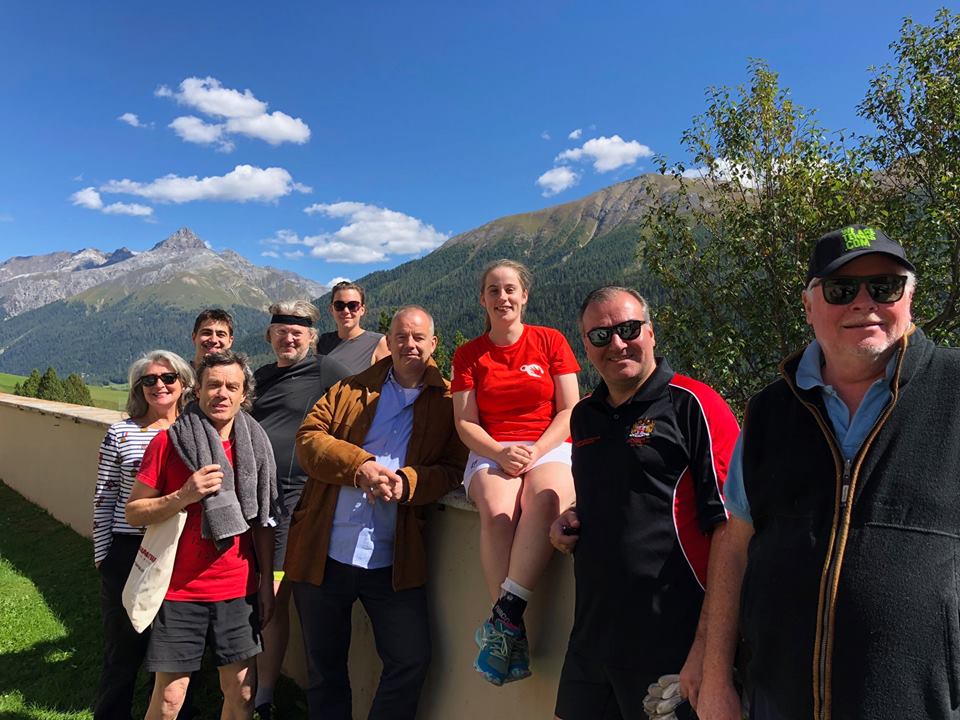 Zuozers Hold Festival Of Fives In The Mountains

Some 40 players have taken part in the latest edition of the Engadin Challenge - a cup held from time to time at the Swiss fives stronghold, the Lyceum Alpinum Zuoz.

These players included old Zuozers, pupils from the lyceum and a nine-strong British contingent, largely from the North Oxford and Old Citizen Eton Fives Clubs.

The stars of the show were the pupils of the lyceum, especially several girls who have become very accomplished players, displaying sophisticated court sense as they anticipated play and intelligent shot selection during the course of rallies.

The Brits - EFA vice-president Ronald Pattison and his wife Louise; Matt Chinery, Rachel Wood, Stefan Nowinski and Karen Hird from North Oxford; and Martin East, Stephen Kelly and John Reynolds from the Old Cits - travelled by car to the courts, enjoying (if that's the word) breathtaking views along the mountain passes on the way.

The weekend was superbly organised. We were split up continuously over the course of the two days so that we played with perhaps a dozen different partners, making new friends and re-connecting with old ones.

For the record, the trophy was won by Old Zuozer Felix Buchi and student Pavel Penev, who beat British visitor Matt Chinery and his student partner in a close final. And once again, the Zuozers proved to be very generous hosts: the Brits ate as their guests on the Saturday night. And Peter Suess, the fives master at Zuoz, accommodated four of us in his flat.

The weekend was one of two which are now held every year in Switzerland. It was run by the Zurich-based old boys of the Lyceum, who usually hold a tournament each autumn at their two courts just outside Zurich. The other annual event occurs in early summer near Geneva, for the Benny Oei Trophy, named after the late guiding spirit of Old Zuozers fives players.

The trip formed part of the Old Citizen Eton Fives Club's 125th anniversary celebration's. Links between the OCEFC and the lyceum go back to the 1920s when the school toured England and then from the early 1950s, when the OCEFC started travelling to the mountains to play on the school's magnificent hillside courts. In turn, Zuozers have become regular visitors to London to take part in the OCEFC's own tournament for the Adams Cup, held since the late 1920s.

The game at the school has been flourishing in recent years partly thanks to a series of English players, many sent by Howard Wiseman's coaching agency, which have included current Kinnaird champion Seb Cooley. The current coach is multiple-Kinnaird winner Matt Wiseman, who's there about 90 days a year.

He reports that around 70 pupils at the Lyceum regularly play in their own time, equally split between boys and girls. Staff have also become keen players - for the last three years a “Matt Wiseman” staff trophy has been competed for with around 12 staff taking part each time.

The annual highlight for the student team is the Summer Games Championship against the old boys of the school. This past July some 15 pairs competed against the Old Zuozers.

The school has even started sending players to the schools' championships in England: 34 students travelled to Eton last March.